I just recently realized how easily it is to manage your installed applications on Google's web-based Play Store. There are two tabs under "My Android Apps", one with a picture of my phone, the other a picture of my tablet. These tabs show what is currently on each device, what has been on each device, and allows you to add or remove whatever apps you want without even touching either. I might do this more.

I will forever add two extra steps to any plan I do thanks to an episode of South Park I saw a long time ago. Warning: That link takes you to tvtropes.org, be prepared to waste several hours upon entering.

----- the column up to this point and the red portion of the Top 5 were written a few days ago, but never finished -----

I made a song using my computer, a really awesome website, and my video camera. It took me way longer than it should have. It ended up being way worse than even I expected. Rather than put it on the internet to suck for everyone, I think I'll just post the sheet music that I made. 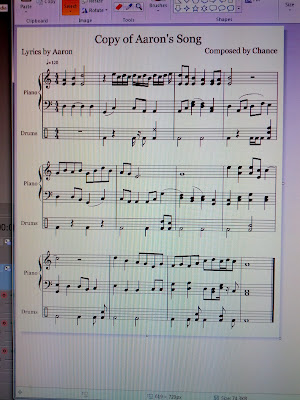 I have in front of me a lease for an apartment in downtown Kansas City. I'm pretty excited about the coming few days. I would be willing to bet my next column won't take place until after I've moved in. So, look forward to that, I guess.

I have been fighting a summertime cold since I first started this column. Maybe when I post it the cold will instantly leave me. Maybe it's a column-associated illness. Those exist, right?

A quick list of things Apple added that weren't already in Android phones:
- Apple's A6 chip
- Backside illuminated sensor on the camera
- Quartz crystal (which is apparently a good thing?)
- A couple Siri improvements (I'm not sure what all is actually new, though)
- ???
- Profit!

A quick list of things Apple added that helps them catch up to Android phones:
- A screen >3.5"
- LTE and HSPA+ (4G)
- Sending an SMS when ignoring a call
- Native panorama support
- A connector that isn't bigger than the other end of the USB cable
- Navigation in maps and 3D modeled aerial imagery
- You can ask your phone about sports scores
- The ability to take pictures as you are taking a video

All those iPod/iPhone accessories you have now, anything using the old connector, will STILL WORK FOLKS! Don't worry! They have this really neato docking adapter! I'm sure the new smaller connector will be able to hold the weight of your phone sitting on the connector, sitting on your accessories! I'm sure there won't be any issues at all with that or the balancing or the newly added ~2 inches on top of the phone (estimated looking at the adapter).

When will the hoards of Apple fanatics begin to realize the innovative and amazing company they once fell in love with is playing a game of catch-up with the competitors that have since surpassed them?

I'm going to leave this off with pictures of some hot air balloons that Melissa and I stumbled into with the help of my big sister:

Top 5: Predictions for the iPhone 5 - And how they turned out.
5. The screen will be (basically) 4 inches diagonally and have a 16:9 aspect ratio. Apple will simultaneously talk about revolutionary and new this is while making cheap jokes about the phone not being a surfboard like 5 inch Android phones. I intentionally stated these two things because they are stupid and contradict each other... and I really want to say I called it. The iPhone 5 will have a 16:9 4 inch display. They didn't say it was revolutionary, but the DID explain why it is such a good thing for 15 minutes. You can see more content at once!
4. The back of the phone won't be glass anymore. Thus you won't be able to shatter the back of your phone. I nailed it (read: I read the rumors and this one panned out)
3. The iPhone connector that we have all come to know and love (hate) will be no more. The new, smaller, connector will become standard. Apple will spin it off as being more advanced or otherwise better to trick people into thinking there is some reason they chose it over a microUSB port when in actuality they are just trying to keep their customers on Apple Island as much as possible. A microUSB port would be just too much like those other phones. The new "Lightning" connector wasn't talked a whole lot about. They didn't say it was capable of doing anything in particular that was too fancy. It IS bi-directional, though. That's pretty spiffy.
2. 4G. When I say 4G I am referring to Long Term Evolution (LTE) 4G. It will be included. Apple will address the battery life concerns with some argument that may or may not actually pan out/be logical. After its release, Apple will get sued by HTC and probably others. I will laugh and laugh. Apple DID include LTE and immediately address the battery life concerns right after. They didn't specify how their battery life would be "even better than the iPhone 4S", so their argument didn't really exist.
1. There will be no near field communication. This prediction I sincerely hope I'm wrong about, as I would love to see NFC become a mainstay, and Apple has the hoards of followers to make that happen... but they will probably exclude it, if for no other reason just to make me really angry. Bingo! Nailed it! Apple has singlehandedly set back the eventual standard for mobile payment (which will, eventually be more standard in and of itself) a year by not including it! None of the other cool tricks for NFC can be incorporated now, either. This is the worst part.

Quote:
"The phone that has changed phones forever"
- Time Magazine said this of the iPhone... 5 years ago. It hasn't changed much since -
NONGOOGLETECH OUTLINE PICTURES