Motto: Just a Normal Day at the Office (Chair)

Even though my life has not been full of extravagant adventures to Thailand since the last update, even though there haven't been any amazing and life-changing events, once-in-a-lifetime experiences, or any other sort of fantastical happenings... I've gotta say things have been going really well! The best part is, I largely have myself to thank for all of this - I have paddled my own boat. I have the kind of happiness that can only be produced in-house. I have done and been exactly the things I want to do and be. I have, for the time being, been truly self-actualized. I've never really been able to say that before.


I guess the awesome vacation and the awesome news about my awesome fiance hasn't really hurt things, either. But I do take a large amount of credit for not coming back home and just moping about. I've picked right back up where I left off with achieving my goals.

Sunday I sat down at my desk chair at ~3-4pm to work on my Life Tracking project that I wrote about at the end of Column #77. Before I knew it, it was dinner time. I put some chicken from a box in the oven. It took 3 minutes, but I was very annoyed by the interruption. Same story 14 to 16 minutes later when the food was done and I had to go through the painstaking trouble of putting it on a plate for consumption. Next thing I knew it was midnight and I had finished.

All the basic, core functionality is built out. It all works great. Better than I even imagined before starting the project. I've added some cool things I didn't even think about until I started actually building the thing. I'll write more about it in 6 days, after I finish my first full week of Life Tracking. You'll get to see some nifty screenshots about what I did this week.

On a related note: I went to Taco Bell today. I literally gasped when I saw the numbers I had to put into my tracker. Turns out unhealthy food is unhealthy.

The Life Tracker is an intentional step towards better achieving my long-standing goal of being healthy. I set out to be "the best physical shape" I've ever been in before I went to Thailand. I think I came fairly close to achieving that goal, depending upon how you measure it. I'm re-upping this goal for when Melissa comes home. Then again for the wedding.

THEN I can get fat.

But I digress. There are two more things I want to talk about before I wrap up:

1. Thailand and California were both AWESOME vacations... I realized, though, that they were MOSTLY awesome because I knew the right people. I had the connections. I got special treatment (private tours, free meal, etc) on both trips. I guess what I'm saying is you gotta know the right people... and if you do; appreciate it, yo.

2. I ran across my favorite somewhat obscure internet phrase today: "Ninja Edit". A ninja edit is an edit made to a post directly after it gets posted. I like the imagery of a ninja very quickly and with great martial art skill pulling up a post he just made to change one or two things about it. Almost all of my proof-reading takes place via ninja edits. Sometimes I don't do them at all, though, so nothing gets proofread. If you find an error, that's wye.

This sentence was added via a ninja edit. If you got to the column in time to see it without this sentence, I'm flattered (and apologize for the wacky formatting Blogger felt like "correcting" for me).

Double ninja edit - Blogger has weird formatting issues sometimes. All the text after the picture is slightly too small. I can't make it normal size. All I can do is make it huge or leave as is.


5. The next phase of the Life Tracking project
4. Starting my Movie Poster Project
3. The "next phase" of Marvel movies (I'm a comic book nerd born a generation too late for actual comic books)
2. Google I/O (next month)
1. Melissa's return (2 months & change)

Quote:
“That was a damn good movie”
- AJ. I just made him watch "Fight Club" for the first time - 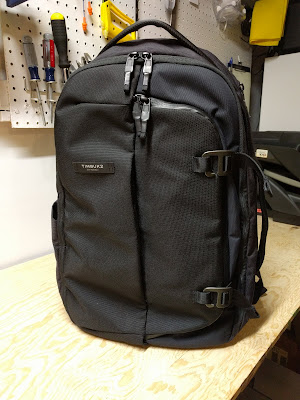 Motto: HELLO RANDOM PERSON GOOGLING FOR REVIEWS! I wrote this for you!
Backstory: I obsessed about backpacks for a few months. I was in a loop where I researched, made lists, Googled, read reviews, watched reviews, went to stores, then started the process all over again in search of the "perfect" bag to buy. I spent a lot of time on Reddit's /r/onebag, /r/backpacks, and /r/EDC. I found the website Carryology and YouTubers Chase Reeves and Bo Ismono. It started (over a year ago, actually) with the GORUCK GR1 - but a few months back expanded to other GORUCKs, the Evergoods CPL24, the Tom Bihn Synapse 25, REI's Rucksacks, and various other bags that you can only pre-order from Kickstarter. About two months ago I stumbled across the Timbuk2 "Never Check Expandable Backpack". Being a long-time Timbuk2 owner and proud writer of the top, most helpful review on Amazon's page for the Timbuk2 Command Messenger bag, finding this bag felt like a sign. The Never Check…
Read more